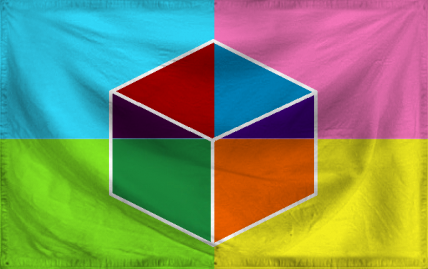 The Republic of Myndia is a massive, efficient nation, ruled by Clark with an even hand, and notable for its ubiquitous missile silos, multi-spousal wedding ceremonies, and stringent health and safety legislation. The compassionate, devout population of 4.181 billion Myndians have some civil rights, but not too many, enjoy the freedom to spend their money however they like, to a point, and take part in free and open elections, although not too often.

The large, corrupt government juggles the competing demands of Administration, Education, and Healthcare. It meets to discuss matters of state in the capital city of Yonuja. The average income tax rate is 79.8%, and even higher for the wealthy.

The frighteningly efficient Myndian economy, worth 563 trillion Meoijnrs a year, is led by the Tourism industry, with significant contributions from Information Technology, Trout Farming, and Book Publishing. State-owned companies are common. Average income is an impressive 134,689 Meoijnrs, and distributed extremely evenly, with little difference between the richest and poorest citizens.

Soldiers who shoot themselves in the foot are regarded as heroes, Myndia's heavy congestion charges are the bane of motorists' lives, glamping Myndians won't sleep in a tent that doesn't include a Jacuzzi, and male cubicle workers stand up every time a woman enters the room. Crime, especially youth-related, is totally unknown, thanks to a capable police force and progressive social policies in education and welfare. Myndia's national animal is the Monkey, which frolics freely in the nation's many lush forests, and its national religion is Indus.

Myndia is ranked 15,053rd in the world and 426th in the South Pacific for Most Advanced Public Education, scoring 8,678.24 on the Edu-tellignce® Test Score.

The Worst army of,