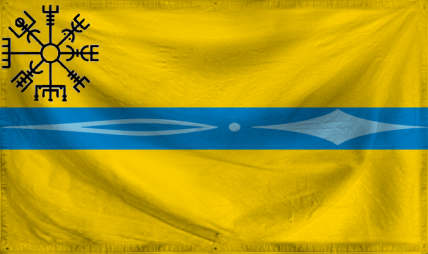 The Vinlandic Republic of Falvaard is a gargantuan, genial nation, ruled by Rægenfríðe Trýgstað with an even hand, and remarkable for its state-planned economy, smutty television, and devotion to social welfare. The compassionate, democratic, cheerful population of 14.603 billion Falvs enjoy extensive civil freedoms, particularly in social issues, while business tends to be more regulated.

The large, liberal government juggles the competing demands of Education, Environment, and Healthcare. It meets to discuss matters of state in the capital city of Kristarant Fals. The income tax rate is 100%.

The frighteningly efficient Falvic economy, worth a remarkable 4,269 trillion Falvic Emblems a year, is driven entirely by a combination of government and state-owned industry, with private enterprise illegal. The industrial sector, which is quite specialized, is led by the Tourism industry, with major contributions from Information Technology and Book Publishing. Average income is an amazing 292,403 Falvic Emblems, and distributed extremely evenly, with little difference between the richest and poorest citizens.

Political satirists and late night comedians weep as the government begins cleaning up its act, crowds of flag-burning protesters tend to accidentally become crowds of burning protesters, new pilots are regularly reminded that they are more expendable than their planes, and increasing numbers of children in Falvaard have different eye and hair color to their supposed fathers. Crime is totally unknown, thanks to a capable police force and progressive social policies in education and welfare. Falvaard's national animal is the unicorn, which frolics freely in the nation's many lush forests.

Falvaard is ranked 13,666th in the world and 84th in Europe for Highest Wealthy Incomes, with 349,734 Standard Monetary Units.

Most Recent Government Activity: 11 hours ago

Berlin and Potsdam, and