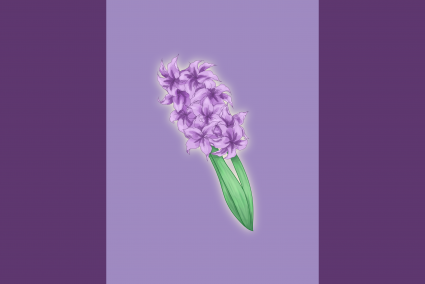 The place for the pleasantly purple people of peace. The High Hyacinth

The Rainbow Paradise of Purple Hyacinth is a massive, efficient nation, ruled by The High Hyacinth with an even hand, and remarkable for its irreverence towards religion, punitive income tax rates, and devotion to social welfare. The compassionate, democratic population of 4.362 billion Purple Hyacinthians are fiercely patriotic and enjoy great social equality; they tend to view other, more capitalist countries as somewhat immoral and corrupt.

The government — a sprawling, bureaucracy-choked morass — juggles the competing demands of Healthcare, Education, and Welfare. It meets to discuss matters of state in the capital city of The City of the Prancing Petals. The average income tax rate is 89.8%, and even higher for the wealthy.

The thriving Purple Hyacinthian economy, worth 313 trillion fragrant flowers a year, is extremely specialized and mostly made up of the Information Technology industry, with significant contributions from Beef-Based Agriculture. State-owned companies are reasonably common. Average income is 71,861 fragrant flowers, and distributed extremely evenly, with little difference between the richest and poorest citizens.

Purple Hyacinthians incessantly needle their doctors for relief, power stations shutting down at night has made bedtime reading tricky, all the playground's a stage for Purple Hyacinthian schoolchildren, and a government program is underway to revitalize Purple Hyacinth's beaches. Crime is totally unknown, thanks to a well-funded police force and progressive social policies in education and welfare. Purple Hyacinth's national animal is the flower-eating menace, which is also the nation's favorite main course, and its national religion is Hyacult.

Purple Hyacinth is ranked 14,225th in the world and 401st in the South Pacific for Most Advanced Public Education, scoring 8,966.9 on the Edu-tellignce® Test Score.