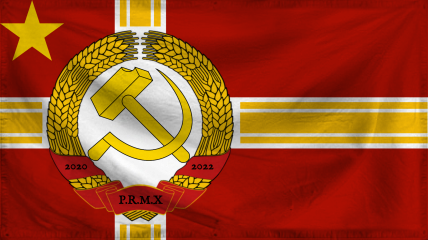 The People's Republic of Maxuus is a massive, genial nation, ruled by Comrade Maximo with a fair hand, and notable for its museums and concert halls, compulsory military service, and soft-spoken computers. The compassionate, democratic population of 4.926 billion Maxuusians are free to do what they want with their own bodies, and vote for whomever they like in elections; if they go into business, however, they are regulated to within an inch of their lives.

The enormous, socially-minded, outspoken government juggles the competing demands of Administration, Education, and Healthcare. It meets to discuss matters of state in the capital city of Maximogrado. The average income tax rate is 94.4%.

The frighteningly efficient Maxuusian economy, worth 628 trillion Maxiums a year, is driven entirely by a combination of government and state-owned industry, with private enterprise illegal. The industrial sector, which is quite specialized, is led by the Information Technology industry, with significant contributions from Trout Farming, Book Publishing, and Arms Manufacturing. Average income is an impressive 127,498 Maxiums, and distributed extremely evenly, with practically no difference between the richest and poorest citizens.

Autocrats are persona non grata, toy versions of heroin paraphernalia let kids pretend to be their favourite TV characters, the nation burns bridges with neighbours who burn their rainforest, and the government spends more on chasing distant comets than on basic infrastructure. Crime, especially youth-related, is totally unknown, thanks to a well-funded police force and progressive social policies in education and welfare. Maxuus's national animal is the Bear, which frolics freely in the nation's many lush forests.

Socialist Balkon, and 9 others.