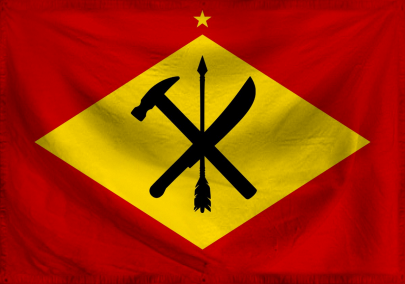 The Plurinational State of Heitoria is a huge, safe nation, ruled by The Supreme People's Assembly with an even hand, and remarkable for its parental licensing program, punitive income tax rates, and restrictive gun laws. The compassionate population of 861 million Heitorians are fiercely patriotic and enjoy great social equality; they tend to view other, more capitalist countries as somewhat immoral and corrupt.

The government — a sprawling, bureaucracy-choked, socially-minded morass — juggles the competing demands of Administration, Education, and Welfare. It meets to discuss matters of state in the capital city of Dome 76. The average income tax rate is 93.0%, and even higher for the wealthy.

The strong Heitorian economy, worth 64.8 trillion person-hours a year, is driven entirely by a combination of government and state-owned industry, with private enterprise illegal. The industrial sector is solely comprised of the Information Technology industry. Average income is 75,209 person-hours, and distributed extremely evenly, with little difference between the richest and poorest citizens.

Brains have been removed from lists of best brain foods, the government helps teach children how to kill a man from six paces, toy versions of heroin paraphernalia let kids pretend to be their favourite TV characters, and the standard police uniform now comes with several colours of belt. Crime is totally unknown, thanks to a very well-funded police force and progressive social policies in education and welfare. Heitoria's national animal is the Saffron finch, which soars majestically through the nation's famously clear skies.

Heitoria is ranked 20,100th in the world and 369th in The Communist Bloc for Smartest Citizens, with 61.75 quips per hour.

The palace of God 2,