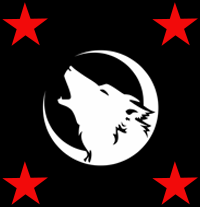 The Hostis Humani Generis of Evil Wolf is a gargantuan, orderly nation, remarkable for its public floggings, absence of drug laws, and punitive income tax rates. The hard-nosed, hard-working, cynical, humorless population of 37.754 billion Wolves are ruled by a mostly-benevolent dictator, who grants the populace the freedom to live their own lives but watches carefully for anyone to slip up.

The government — a sprawling, bureaucracy-choked, corrupt, well-organized morass — juggles the competing demands of Law & Order, Defense, and Education. It meets to discuss matters of state in the capital city of Scardinograd. The average income tax rate is 94.6%.

The very strong Wolfist economy, worth a remarkable 3,275 trillion black teeth a year, is driven entirely by a combination of government and state-owned industry, with private enterprise illegal. The industrial sector, which is extremely specialized, is mostly made up of the Arms Manufacturing industry, with significant contributions from Uranium Mining. Average income is 86,769 black teeth, and evenly distributed, with the richest citizens earning only 4.0 times as much as the poorest.

Evil Wolf is notorious for its citizens' infidelity, the public health bureaucracy is wrapped in miles of red tape, school uniforms are compulsory, and Evil Wolf has designated Scardinograd as its capital city. Crime, especially youth-related, is totally unknown, thanks to the all-pervasive police force and progressive social policies in education and welfare. Evil Wolf's national animal is the dark wolf, which frolics freely in the nation's many lush forests.

Evil Wolf is ranked 252,828th in the world and 303rd in Lone Wolves United for Most Avoided, scoring 0.92 on the Kardashian Reflex Score.