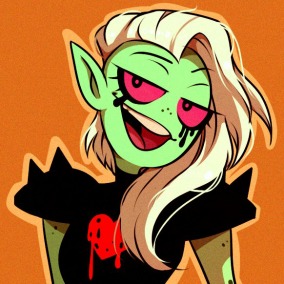 The Burning Trash Fire of Lord Dominator is a colossal, efficient nation, ruled by Dee with an iron fist, and renowned for its barren, inhospitable landscape, unlimited-speed roads, and spontaneously combusting cars. The hard-nosed, hard-working, cynical, humorless, devout population of 9.527 billion Deedas are ruled with an iron fist by the corrupt, dictatorship government, which oppresses anyone who isn't on the board of a Fortune 500 company. Large corporations tend to be above the law, and use their financial clout to gain ever-increasing government benefits at the expense of the poor and unemployed.

The tiny, corrupt, pro-business, well-organized government prioritizes Defense, although Industry and Spirituality are also considered important, while Environment and Welfare aren't funded at all. It meets to discuss matters of state in the capital city of Testing Zone 1. Income tax is unheard of.

The frighteningly efficient Deeda economy, worth a remarkable 4,388 trillion Credits a year, is driven almost entirely by the private sector, which is broadly diversified and led by the Arms Manufacturing industry, with major contributions from Retail, Gambling, and Soda Sales. Average income is an amazing 460,601 Credits, but there is a vast disparity between incomes, with the richest 10% of citizens earning 4,299,579 per year while the poor average 4,329, a ratio of 993 to 1.

Police nightsticks see use all day long, manual labourers must be willing to have cybernetic limbs to get a job, open-casket funerals are avoided at all cost, and Dee often plays real life games of Tower Defense against hordes of angry villagers. Crime, especially youth-related, is so common that it is unusual to encounter someone following the law, perhaps because of the country's complete lack of prisons. Lord Dominator's national animal is the Cockroach, which is also the nation's favorite main course, and its national religion is Entropism.

Lord Dominator is ranked 22nd in the world and 1st in Forest for Fattest Citizens, with 99.22 Obesity Rate.