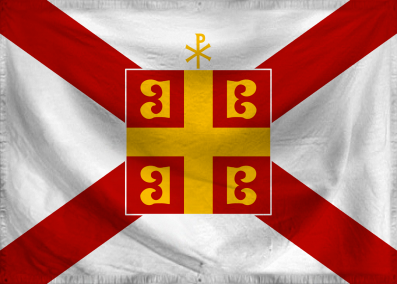 The Imperium of Romanum et Britannia Minor is a massive, safe nation, ruled by Imperator Augustus IV with an even hand, and remarkable for its stringent health and safety legislation. The quiet, industrious population of 2.209 billion Romans have some civil rights, but not too many, enjoy the freedom to spend their money however they like, to a point, and take part in free and open elections, although not too often.

The medium-sized government juggles the competing demands of Healthcare, Education, and Law & Order. It meets to discuss matters of state in the capital city of Juliople. The average income tax rate is 27.9%, but much higher for the wealthy.

The sizeable but inefficient Roman economy, worth 75.2 trillion Drachmas a year, is led by the Information Technology industry, with major contributions from Gambling, Uranium Mining, and Retail. Black market activity is notable. State-owned companies are common. Average income is 34,029 Drachmas, and evenly distributed, with the richest citizens earning only 2.2 times as much as the poorest.

Recruitment posters proclaim the army to be both fabulous and fashionable, the Department of Health is snowed under by requests for crisper ciabatta and tenderer tagliatelle, libraries are now installed with jacuzzis and mini-bars, and solving crossword puzzles requires fluency in at least five languages. Crime is well under control, thanks to a capable police force and progressive social policies in education and welfare. Romanum et Britannia Minor's national animal is the Eagle, which soars majestically through the nation's famously clear skies, and its national religion is Roman Orthodox Church.

Romanum et Britannia Minor is ranked 85,910th in the world and 44th in Liberal Democratic Union for Most Scientifically Advanced, scoring 90.28 on the Kurzweil Singularity Index.

Most Recent Government Activity: 103 minutes ago

The Sovereign Nation of Texas,