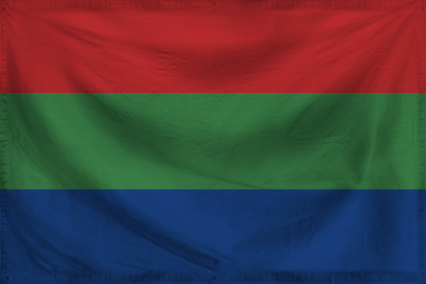 The Principality of Regrbl is a massive, environmentally stunning nation, ruled by Varnava Petrov with an iron fist, and remarkable for its frequent executions, free-roaming dinosaurs, and restrictive gun laws. The hard-nosed, cynical population of 2.12 billion Regrblis are kept under strict control by the oppressive government, which measures its success by the nation's GDP and refers to individual citizens as "human resources."

The medium-sized, corrupt, moralistic, well-organized government prioritizes Education, with Environment, Administration, and Industry also on the agenda, while Spirituality isn't funded at all. It meets to discuss matters of state in the capital city of Pumpkin Patch Town. The average income tax rate is 46.2%, but much higher for the wealthy.

The powerhouse Regrblian economy, worth 172 trillion Pumpkins a year, is quite specialized and led by the Trout Farming industry, with significant contributions from Information Technology, Cheese Exports, and Beef-Based Agriculture. State-owned companies are reasonably common. Average income is 81,134 Pumpkins, and evenly distributed, with the richest citizens earning only 2.3 times as much as the poorest.

Internet moderator is one of the most popular jobs among the nation's more socially awkward citizens, scavengers with burlap sacks and shovels skulk around graveyards, the upper class have been throwing riots after hunting was recently banned, and dining out often involves GMO Chickens on the plate no matter what you order. Crime, especially youth-related, is totally unknown, thanks to a capable police force and progressive social policies in education and welfare. Regrbl's national animal is the GMO Chicken, which frolics freely in the nation's many lush forests, and its national religion is Eastern Orthodoxy.

Regrbl is ranked 43,270th in the world and 3rd in Yecyma for Largest Welfare Programs, scoring 2,127.2 on the Safety Net Mesh Density Rating.