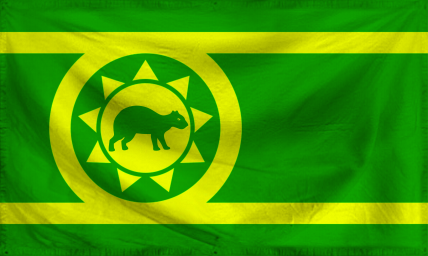 The Federal Republic of Cutias is a massive, socially progressive nation, ruled by Marcus Nery with a fair hand, and renowned for its museums and concert halls, ubiquitous missile silos, and keen interest in outer space. The hard-nosed, democratic population of 1.197 billion Cutiasians enjoy a sensible mix of personal and economic freedoms, while the political process is open and the people's right to vote held sacrosanct.

The medium-sized government juggles the competing demands of Education, Defense, and Industry. It meets to discuss matters of state in the capital city of Paca Tatu. The average income tax rate is 47.6%, but much higher for the wealthy.

The frighteningly efficient Cutiasian economy, worth 175 trillion Bitcoins a year, is broadly diversified and led by the Information Technology industry, with significant contributions from Tourism, Arms Manufacturing, and Retail. State-owned companies are reasonably common. Average income is an impressive 146,548 Bitcoins, and distributed extremely evenly, with little difference between the richest and poorest citizens.

Imitation is the sincerest form of felony, popular candidates who don't suffer last-second political scandals tend to get fished out of the Paca Tatu River, bands of paramedics walk the streets looking for suspicious medical activity, and being Marcus Nery has been voted one of the top ten most dangerous jobs. Crime, especially youth-related, is totally unknown, thanks to a capable police force and progressive social policies in education and welfare. Cutias's national animal is the Cutia, which frolics freely in the nation's many lush forests, and its national religion is Agnostics.

Cutias is ranked 8,989th in the world and 59th in Europeia for Largest Retail Industry, scoring 12,554.18 on the Shrinkwrap Consignment Productivity Index.