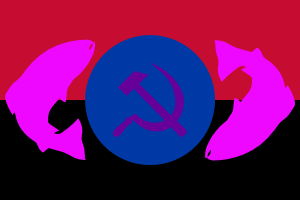 There is no life, without fun

The Oceanic Fauzjhian Province of Auceanznia is a gargantuan, socially progressive nation, ruled by Kyria Pinkfields with a fair hand, and remarkable for its rum-swilling pirates, lack of airports, and stringent health and safety legislation. The compassionate, democratic, cheerful population of 17.767 billion Auceanznians are free to do what they want with their own bodies, and vote for whomever they like in elections; if they go into business, however, they are regulated to within an inch of their lives.

The enormous, liberal, socially-minded government juggles the competing demands of Education, Environment, and Healthcare. It meets to discuss matters of state in the capital city of Sixcitia. The income tax rate is 100%.

The frighteningly efficient Auceanznian economy, worth a remarkable 7,396 trillion Fauzjhiauxes a year, is driven entirely by a combination of government and state-owned industry, with private enterprise illegal. The industrial sector, which is highly specialized, is led by the Tourism industry, with major contributions from Information Technology and Book Publishing. Average income is an amazing 416,306 Fauzjhiauxes, and distributed extremely evenly, with practically no difference between the richest and poorest citizens.

Bemused citizens are encouraged to sing foreign-language hymns of religions they have never heard of, the government has ordered a moratorium on referenda, Kyria Pinkfields's recent "I have a dream that we will fight them by raking muck on the beaches" speech seems a little derivative to many, and prankster scientists legally change their names to silly pseudonyms before major discoveries. Crime is totally unknown, thanks to a capable police force and progressive social policies in education and welfare. Auceanznia's national animal is the Squid, which frolics freely in the nation's sparkling oceans, and its national religion is Communism.

Auceanznia is ranked 77th in the world and 8th in the Rejected Realms for Longest Average Lifespans, with 101.44 years.