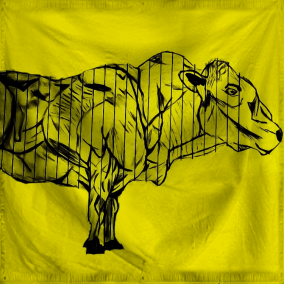 Look what you made me do
WA Member

The Bovinian State of CLovidia is a colossal, orderly nation, ruled by Grandmaster Bee with an iron fist, and notable for its parental licensing program, public floggings, and stringent health and safety legislation. The hard-nosed, hard-working, cynical, humorless population of 5.461 billion CLovidians are kept under strict control by the oppressive government, which measures its success by the nation's GDP and refers to individual citizens as "human resources."

The medium-sized, corrupt, well-organized government juggles the competing demands of Law & Order, Defense, and Education. It meets to discuss matters of state in the capital city of Belgian Blue City. Citizens pay a flat income tax of 65.2%.

The frighteningly efficient CLovidian economy, worth a remarkable 1,026 trillion human lives a year, is broadly diversified and led by the Information Technology industry, with significant contributions from Arms Manufacturing, Retail, and Uranium Mining. Black market activity is rampant. Average income is an impressive 187,968 human lives, but there is a large disparity between incomes, with the richest 10% of citizens earning 830,955 per year while the poor average 26,600, a ratio of 31.2 to 1.

Mystics are claiming that a simultaneous rise in scepticism and education budgets is correlation rather than causation, a nickname of "Doctor Death" probably indicates a decorated war hero, academics have a bone to pick with free market entrepreneurs, and unemployed accountants keep double-entry ledgers of their benefit claims. Crime, especially youth-related, is totally unknown, thanks to a well-funded police force and progressive social policies in education and welfare. CLovidia's national animal is the 1337 CLovine, which teeters on the brink of extinction due to widespread deforestation.

CLovidia is ranked 46,730th in the world and 1,074th in the Rejected Realms for Largest Timber Woodchipping Industry, scoring 4,502.38 on the Tasmanian Pulp Environmental Export Index.