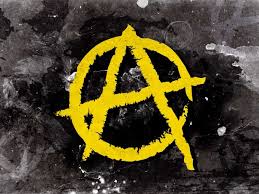 A lesson in diplomacy. Never trust anyone
WA Member

The Anti-Government Anarchy of United Anarchists of Earth is a huge, efficient nation, ruled by Carter with a fair hand, and remarkable for its complete lack of prisons, free-roaming dinosaurs, and spontaneously combusting cars. The hard-nosed, hard-working, democratic, devout population of 883 million Anarchist of Earthians live in a state of perpetual fear, as a complete breakdown of social order has led to the rise of order through biker gangs.

The tiny, corrupt, liberal, pro-business, outspoken government is primarily concerned with Industry, with Healthcare and Education also on the agenda, while Law & Order and Environment receive no funds. It meets to discuss matters of state in the capital city of Anarchy City. Citizens pay a flat income tax of 7.9%.

The frighteningly efficient United Anarchists of Earthian economy, worth 89.9 trillion Droomas a year, is driven almost entirely by the private sector, which is fairly diversified and led by the Retail industry, with major contributions from Gambling, Soda Sales, and Pizza Delivery. Average income is an impressive 101,804 Droomas, but there is a large disparity between incomes, with the richest 10% of citizens earning 488,807 per year while the poor average 12,380, a ratio of 39.5 to 1.

Hand-to-hand combat experience is udderly essential for all dairy ranchers, the poor are forced into bankruptcy by their energy bills, banana distribution among collective farm workers is an important topic in public discourse, and roadside walls are being built and mother nature is paying for it. Crime, especially youth-related, is all-pervasive, perhaps because of the country's complete lack of prisons. United Anarchists of Earth's national animal is the Pegasus, which teeters on the brink of extinction due to toxic air pollution.

United Anarchists of Earth is ranked 6,182nd in the world and 51st in the Rejected Realms for Most Influential, scoring 11,322 on the Soft Power Disbursement Rating.