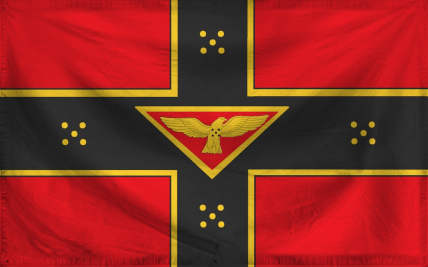 The Totar State of Totaristan is a gargantuan, efficient nation, ruled by Imperador Totar I with an iron fist, and remarkable for its barren, inhospitable landscape, frequent executions, and stringent health and safety legislation. The hard-nosed, cynical, humorless population of 10.218 billion Totaristanos are kept under strict control by the oppressive government, which measures its success by the nation's GDP and refers to individual citizens as "human resources."

The large, corrupt, moralistic government prioritizes Defense, with Law & Order, Industry, and Education also on the agenda, while Social Policy and International Aid are ignored. It meets to discuss matters of state in the capital city of Totar City. The average income tax rate is 96.1%.

The frighteningly efficient Totaristano economy, worth a remarkable 3,573 trillion Totarias a year, is fairly diversified and mostly comprised of black market activity, especially in Arms Manufacturing, Information Technology, Uranium Mining, and Woodchip Exports. State-owned companies are reasonably common. Average income is an amazing 349,710 Totarias, and evenly distributed, with the richest citizens earning only 2.5 times as much as the poorest.

Medical experts advise that those claiming to be medical experts are probably fraudsters, the flight attendant who draws the short straw is on "cockpit bucket duty", space has been brought down to earth with constellations of cancer cases across Totaristan, and Totaristan isn't what it used to be. Crime, especially youth-related, is totally unknown, thanks to a very well-funded police force and progressive social policies in education and welfare. Totaristan's national animal is the Tanque, which teeters on the brink of extinction due to widespread deforestation, and its national religion is Dataísmo.

Totaristan is ranked 16,219th in the world and 29th in Portugal for Longest Average Lifespans, with 90.75 years.