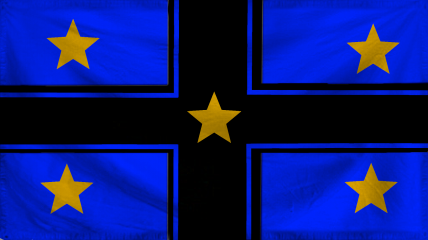 Life can be weird, but we must move on Valdener II
WA Member

The Empire of The Unidet Of Life is a massive, safe nation, ruled by Valdener II with an even hand, and renowned for its museums and concert halls, punitive income tax rates, and stringent health and safety legislation. The compassionate, devout population of 4.539 billion unidets are fiercely patriotic and enjoy great social equality; they tend to view other, more capitalist countries as somewhat immoral and corrupt.

The enormous government juggles the competing demands of Healthcare, Education, and Administration. It meets to discuss matters of state in the capital city of Esttow. The average income tax rate is 85.1%, and even higher for the wealthy.

The powerhouse unidet economy, worth 382 trillion Kingmons a year, is quite specialized and led by the Book Publishing industry, with significant contributions from Information Technology, Arms Manufacturing, and Tourism. State-owned companies are reasonably common. Average income is 84,246 Kingmons, and distributed extremely evenly, with practically no difference between the richest and poorest citizens.

The government is coughing up funds for lung cancer victims, interviewees for teaching jobs are waterboarded to "reveal undesirable histories", every week is blindness awareness week, and kindergartners' favourite dance move is the stop-drop-and-roll. Crime, especially youth-related, is totally unknown, thanks to a very well-funded police force and progressive social policies in education and welfare. The Unidet Of Life's national animal is the Red bird, which soars majestically through the nation's famously clear skies, and its national religion is Flanism.