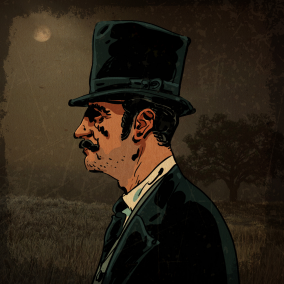 The Mysterious Stranger of The Strange Man is a massive, environmentally stunning nation, remarkable for its daily referendums, punitive income tax rates, and stringent health and safety legislation. The hard-nosed, democratic, devout population of 1.733 billion Mysteries are fiercely patriotic and enjoy great social equality; they tend to view other, more capitalist countries as somewhat immoral and corrupt.

The medium-sized, socially-minded government juggles the competing demands of Defense, Welfare, and Spirituality. The average income tax rate is 54.1%, and even higher for the wealthy.

The sizeable but sluggish a mystery economy, worth 68.4 trillion dollars a year, is driven entirely by a combination of government and state-owned industry, with private enterprise illegal. The industrial sector, which is broadly diversified, is led by the Pizza Delivery industry, with major contributions from Trout Farming, Retail, and Book Publishing. Average income is 39,492 dollars, and distributed extremely evenly, with practically no difference between the richest and poorest citizens.

Basic multiplication is all you need to know to have a child, the volume of paperwork used to complete a single environmental assessment defeats the purpose, the government is cutting back on the number of political prisoners executed each year, and crocodile roadkill is smeared across the asphalt of the new Formula One track. Crime is totally unknown, thanks to a capable police force and progressive social policies in education and welfare. The Strange Man's national animal is the Top hat, which frolics freely in the nation's many lush forests.

The Strange Man is ranked 134,144th in the world and 5th in Revolution for Fattest Citizens, with 10 Obesity Rate.