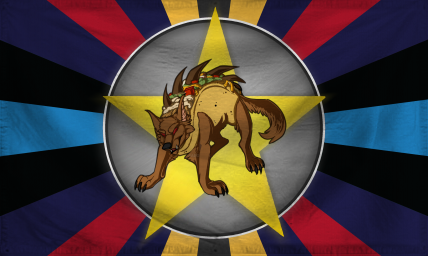 The Kingdom of SquatchyGarth the Chalupacabra is a massive, efficient nation, notable for its ubiquitous missile silos, rampant corporate plagiarism, and frequent executions. The hard-nosed, hard-working population of 3.424 billion SquatchyGarth the Chalupacabrans have some civil rights, but not too many, enjoy the freedom to spend their money however they like, to a point, and take part in free and open elections, although not too often.

The medium-sized government juggles the competing demands of Law & Order, Healthcare, and Education. The average income tax rate is 40.6%.

The thriving SquatchyGarth the Chalupacabran economy, worth 235 trillion Chalupa Coins a year, is led by the Uranium Mining industry, with major contributions from Information Technology, Woodchip Exports, and Pizza Delivery. Black market activity is frequent. State-owned companies are common. Average income is 68,694 Chalupa Coins, and evenly distributed, with the richest citizens earning only 4.8 times as much as the poorest.

In government offices a hidden killer takes the lives of ministers and civil servants, new pilots are regularly reminded that they are more expendable than their planes, failed genetic experiments wreak havoc as they roam the countryside, and distrust of taps has many people bathing only with bottled mineral water. Crime is totally unknown, thanks to a well-funded police force and progressive social policies in education and welfare. SquatchyGarth the Chalupacabra's national animal is the Chupa Chalupa, which teeters on the brink of extinction due to widespread deforestation.

SquatchyGarth the Chalupacabra is ranked 72,672nd in the world and 11th in The Sasquatch Republic for Largest Cheese Export Sector, scoring 3,149.62 on the Mozzarella Productivity Index.