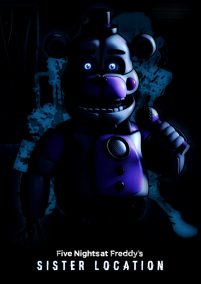 I cant fix you Circus Baby

The Circus of the Dead of Sister Location is a colossal, orderly nation, ruled by Circus Baby with an iron fist, and notable for its lack of airports, frequent executions, and restrictive gun laws. The hard-nosed, hard-working, cynical, devout population of 7.406 billion Animatronics are kept under strict control by the oppressive government, which measures its success by the nation's GDP and refers to individual citizens as "human resources."

The medium-sized, moralistic, well-organized government juggles the competing demands of Healthcare, Spirituality, and Defense. It meets to discuss matters of state in the capital city of Sister Location. The average income tax rate is 40.8%.

The powerhouse Animatronic economy, worth 496 trillion Faz Tokens a year, is quite specialized and dominated by the Trout Farming industry, with significant contributions from Information Technology, Uranium Mining, and Furniture Restoration. State-owned companies are reasonably common. Average income is 67,038 Faz Tokens, and evenly distributed, with the richest citizens earning only 3.1 times as much as the poorest.

The government is pouring funds into the nation's welfare system, families are only permitted to have one child, genetic researchers have been expelled, and the most popular WhoTube videos are ones featuring parodies of iconic songs. Crime, especially youth-related, is totally unknown, thanks to a capable police force and progressive social policies in education and welfare. Sister Location's national animal is the Ennard, which frolics freely in the nation's many lush forests, and its national religion is Revenge.

Sister Location is ranked 57,975th in the world and 4th in FNAF for Highest Poor Incomes, with 36,306.35 Standard Monetary Units.