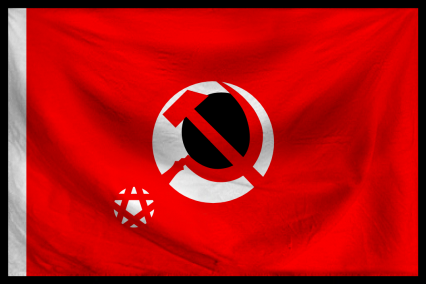 The People's Republic of Shikishimagrad is a huge, environmentally stunning nation, remarkable for its museums and concert halls, state-planned economy, and punitive income tax rates. The democratic, devout population of 453 million Shikishimagradians enjoy extensive civil rights and enjoy a level of social equality free from the usual accompanying government corruption.

The enormous, socially-minded government juggles the competing demands of Welfare, Spirituality, and Education. It meets to discuss matters of state in the capital city of Ishizuchi. The average income tax rate is 69.4%, and even higher for the wealthy.

The sizeable but sluggish Shikishimagradian economy, worth 12.2 trillion Noneuropean Kronees a year, is driven entirely by a combination of government and state-owned industry, with private enterprise illegal. The industrial sector is dominated by the Trout Farming industry, with significant contributions from Cheese Exports, Automobile Manufacturing, and Door-to-door Insurance Sales. Average income is 26,885 Noneuropean Kronees, and distributed extremely evenly, with practically no difference between the richest and poorest citizens.

The diplomatic corps tends to open negotiations by insulting all the foreigners in the room, giggling teens are asked to put their mouths on rubber dolls, EpiPen sales have skyrocketed, and Shikishimagrad has designated Ishizuchi as its capital city. Crime, especially youth-related, is totally unknown, thanks to a well-funded police force and progressive social policies in education and welfare. Shikishimagrad's national animal is the nuclear-powered pocket hampster, which frolics freely in the nation's many lush forests.

Shikishimagrad is ranked 149,381st in the world and 21st in Noneuropean Union for Most Advanced Law Enforcement, scoring 1,103.44 on the Orwell Orderliness Index.