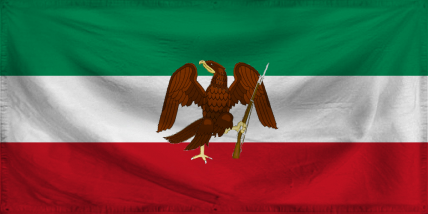 The Republic of Segentova is a gargantuan, cultured nation, ruled by Chief of State Pierre Delacroix with an even hand, and remarkable for its pith helmet sales, daily referendums, and punitive income tax rates. The compassionate, hard-working, cheerful population of 11.3 billion Segentovans have some civil rights, but not too many, enjoy the freedom to spend their money however they like, to a point, and take part in free and open elections, although not too often.

The government — a sprawling, bureaucracy-choked morass — juggles the competing demands of Education, Environment, and Healthcare. It meets to discuss matters of state in the capital city of Nouveau Toulon. The average income tax rate is 96.8%.

The Segen economy, worth a remarkable 1,029 trillion Segentovan Livres a year, is extremely specialized and solely comprised of the Tourism industry. State-owned companies are reasonably common. Average income is 91,112 Segentovan Livres, and distributed extremely evenly, with little difference between the richest and poorest citizens.

Victims of crime are viewed as less trustworthy than politicians, orthopaedics patients often have a bounce in their step, citizen radio operators agree that the certification test can open up a world of hertz, and theft is considered to be okay if the crime happened a long time ago. Crime is totally unknown, thanks to a very well-funded police force and progressive social policies in education and welfare. Segentova's national animal is the Wild Segentovan Tarasque Lizard, which frolics freely in the nation's many lush forests, and its national religion is Segen Reformed Church.

Segentova is ranked 151,657th in the world and 123rd in The Western Isles for Largest Black Market, with 126 billion Standard Monetary Units.