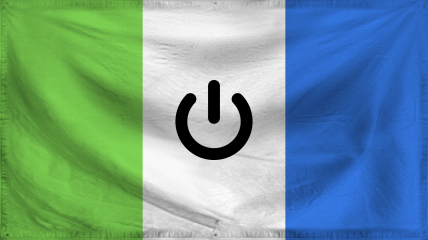 The Federation of Seccuste is a massive, genial nation, notable for its anti-smoking policies, free-roaming dinosaurs, and punitive income tax rates. The compassionate, democratic population of 2.847 billion Bogans are fiercely patriotic and enjoy great social equality; they tend to view other, more capitalist countries as somewhat immoral and corrupt.

The large government juggles the competing demands of Education, Administration, and Healthcare. It meets to discuss matters of state in the capital city of Sete. The average income tax rate is 84.0%, and even higher for the wealthy.

The frighteningly efficient Boganian economy, worth 409 trillion Harmans a year, is driven entirely by a combination of government and state-owned industry, with private enterprise illegal. The industrial sector is dominated by the Information Technology industry, with significant contributions from Book Publishing, Tourism, and Cheese Exports. Average income is an impressive 143,862 Harmans, and distributed extremely evenly, with practically no difference between the richest and poorest citizens.

Leader has been nicknamed 'Robomop', discrimination on the basis of sexual orientation is illegal, group hugs break out during floor votes, and motorists must pay to enter inner-cities during peak hours. Crime, especially youth-related, is totally unknown, thanks to a capable police force and progressive social policies in education and welfare. Seccuste's national animal is the Kardon, which frolics freely in the nation's many lush forests.