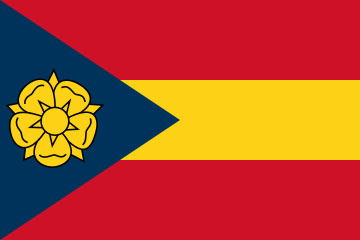 The Imperial Empire of Portugal Is Great is a colossal, orderly nation, ruled by Klaus Vetz with an iron fist, and remarkable for its flagrant waste-dumping, compulsory gun ownership, and suspicion of poets. The hard-nosed, hard-working, cynical, humorless, devout population of 9.16 billion Weak Portuguese are ruled with an iron fist by the corrupt, dictatorship government, which oppresses anyone who isn't on the board of a Fortune 500 company. Large corporations tend to be above the law, and use their financial clout to gain ever-increasing government benefits at the expense of the poor and unemployed.

The relatively small, corrupt, moralistic, pro-business, well-organized government juggles the competing demands of Defense, Industry, and Law & Order. It meets to discuss matters of state in the capital city of New Lisbon. Citizens pay a flat income tax of 29.5%.

The frighteningly efficient Portugal Is Greatian economy, worth a remarkable 3,080 trillion Stolns a year, is broadly diversified and led by the Retail industry, with major contributions from Arms Manufacturing, Uranium Mining, and Information Technology. Black market activity is rampant. Average income is an amazing 336,247 Stolns, but there is a vast disparity between incomes, with the richest 10% of citizens earning 3,097,914 per year while the poor average 3,687, a ratio of 840 to 1.

A baby's first breath is also a baby's first felony, suburban families are finding themselves increasingly short on food as they waste precious water on their lawns, epileptic patients switch their medications to whichever has a 'buy one get one free' offer, and dozens of viewers tune in weekly to hear whether a comma has been added to Clause 5 in Subsection B of Law 58375. Crime, especially youth-related, is totally unknown, thanks to a capable police force and progressive social policies in education and welfare. Portugal Is Great's national animal is the Housecat, which is also the nation's favorite main course, and its national religion is Foxism.

Portugal Is Great is ranked 204,254th in the world and 167th in The Labyrinth for Most Cheerful Citizens, with 19.53 Percentage Of Water Glasses Perceived Half-Full.

Most Recent Government Activity: 1 day ago