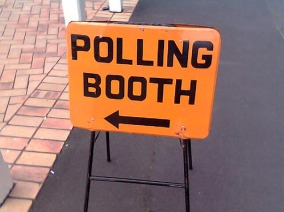 The Federation of Polling Booths is a gargantuan, cultured nation, ruled by The Pollster with an iron fist, and remarkable for its deadly medical pandemics, zero percent divorce rate, and punitive income tax rates. The hard-nosed, hard-working, cynical, humorless, devout population of 15.204 billion Polling Boothsians are kept under strict control by the oppressive government, which measures its success by the nation's GDP and refers to individual citizens as "human resources."

The large, corrupt, moralistic government juggles the competing demands of Industry, Administration, and Law & Order. It meets to discuss matters of state in the capital city of The Poll Booth. Citizens pay a flat income tax of 81.2%.

The frighteningly efficient Polling Boothsian economy, worth a remarkable 3,103 trillion Electoral Roles a year, is quite specialized and mostly comprised of black market activity, especially in Retail, Uranium Mining, Woodchip Exports, and Door-to-door Insurance Sales. Average income is an amazing 204,109 Electoral Roles, but there is a large disparity between incomes, with the richest 10% of citizens earning 952,668 per year while the poor average 26,176, a ratio of 36.4 to 1.

The country has essentially become 15.204 billion nations within a nation, a large-scale revitalization of the education system is underway, politicians are often found scavenging bins at night to supplement their income, and the government's giant servers are often used as a tourist trap. Crime, especially youth-related, is totally unknown, thanks to a very well-funded police force and progressive social policies in education and welfare. Polling Booths's national animal is the Ballot, which teeters on the brink of extinction due to widespread deforestation, and its national religion is Polling.

Polling Booths is ranked 267,757th in the world and 973rd in Europeia for Smartest Citizens, with 0.3 quips per hour.