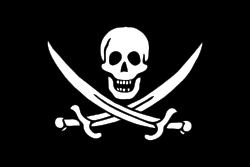 For God and liberty
WA Member

The Republic of Pirates and Buccaneers is a colossal, cultured nation, ruled by Magistrate Captain Charles Harlock with an even hand, and renowned for its free-roaming dinosaurs, frequent executions, and rampant corporate plagiarism. The hard-nosed, hard-working, democratic, devout population of 5.072 billion Pirates and Buccaneers have some civil rights, but not too many, enjoy the freedom to spend their money however they like, to a point, and take part in free and open elections, although not too often.

The relatively small, corrupt government juggles the competing demands of Defense, Industry, and Environment. It meets to discuss matters of state in the capital city of New Libertalia. The average income tax rate is 38.0%, but much higher for the wealthy.

The frighteningly efficient Pirates and Buccaneersian economy, worth a remarkable 1,509 trillion Doubloons a year, is quite specialized and led by the Arms Manufacturing industry, with major contributions from Tourism, Retail, and Gambling. Black market activity is rampant. Average income is an amazing 297,560 Doubloons, and evenly distributed, with the richest citizens earning only 2.6 times as much as the poorest.

Industry tycoons rarely hide their misdeeds due to the government's habit of bailing them out, workers of "fairweather faith" claim six months of paid leave for holy days per year, urban parents tell their children that the family car went to a farm upstate, and the nation's "surprisingly chill" military is renowned for its horrendous war crimes. Crime, especially youth-related, is so common that it is unusual to encounter someone following the law, perhaps because of the country's complete lack of prisons. Pirates and Buccaneers's national animal is the Parrot, which soars majestically through the nation's famously clear skies, and its national religion is Protestantism.

Pirates and Buccaneers is ranked 7,727th in the world and 1st in Republic of Pirates for Largest Publishing Industry, scoring 13,712.43 on the Bella Potter Productivity e-Index.