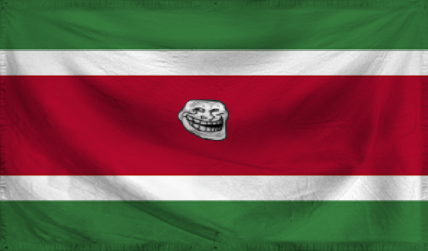 The United Socialist States of Pai Land is a huge, orderly nation, ruled by Supreme Leader Mr Troller with an iron fist, and renowned for its frequent executions, state-planned economy, and punitive income tax rates. The cynical population of 932 million Paians are ruled with an iron fist by the dictatorship government, which ensures that no-one outside the party gets too rich. In their personal lives, however, citizens are relatively unoppressed; it remains to be seen whether this is because the government genuinely cares about its people, or if it hasn't gotten around to stamping out civil rights yet.

The enormous, well-organized government juggles the competing demands of Healthcare, Law & Order, and Administration. It meets to discuss matters of state in the capital city of Jaho'ue. The average income tax rate is 68.7%, and even higher for the wealthy.

The strong Paian economy, worth 60.3 trillion Pesos a year, is driven entirely by a combination of government and state-owned industry, with private enterprise illegal. The industrial sector is led by the Tourism industry, with significant contributions from Uranium Mining, Information Technology, and Retail. Average income is 64,744 Pesos, and evenly distributed, with the richest citizens earning only 2.3 times as much as the poorest.

Supreme Leader Mr Troller's relatives have been married into the royal families of foreign nations against their will, troops clank into battle wearing antique suits of armour, the government violently suppresses separatist movements, and soldiers on first dates introduce themselves only by their ranks and serial numbers. Crime, especially youth-related, is totally unknown, thanks to a very well-funded police force and progressive social policies in education and welfare. Pai Land's national animal is the Monkey.

Pai Land is ranked 46,842nd in the world and 1,311th in the South Pacific for Most Advanced Public Education, scoring 3,654.61 on the Edu-tellignce® Test Score.

Most Recent Government Activity: 90 minutes ago