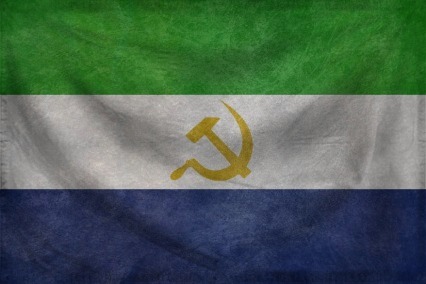 The Proud Socialist States of Orennica is a colossal, cultured nation, ruled by Joseph Manlin with a fair hand, and renowned for its ban on automobiles, keen interest in outer space, and devotion to social welfare. The compassionate, democratic, cheerful, devout population of 7.751 billion Orennicans love a good election, and the government gives them plenty of them. Universities tend to be full of students debating the merits of various civil and political rights, while businesses are tightly regulated and the wealthy viewed with suspicion.

The enormous government juggles the competing demands of Education, Administration, and Environment. It meets to discuss matters of state in the capital city of Occupatus. The average income tax rate is 97.4%.

The frighteningly efficient Orennican economy, worth a remarkable 1,304 trillion Orennican tribops a year, is driven entirely by a combination of government and state-owned industry, with private enterprise illegal. The industrial sector, which is quite specialized, is led by the Information Technology industry, with major contributions from Tourism and Book Publishing. Average income is an impressive 168,341 Orennican tribops, and distributed extremely evenly, with little difference between the richest and poorest citizens.

There's a hole in the heart of every Orennican city, government employees have reverted to carrier pigeon due to never-ending virus scans, the 'Museum Of Stuff We Stole' is a tourist favourite, and hidden bedroom-cams are installed to catch mothers doing their kids' homework. Crime is totally unknown, thanks to a capable police force and progressive social policies in education and welfare. Orennica's national animal is the Unichicken, which frolics freely in the nation's many lush forests, and its national religion is Atheism.

Orennica is ranked 2,686th in the world and 2nd in The Slide Countries for Most Popular Tourist Destinations, with 2,308.71 Tourists Per Hour.

The Glorious State of Corbyn.