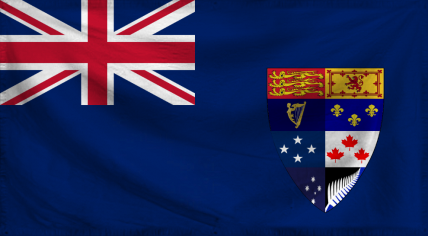 The Greater United Kingdom of Oceania-America is a massive, efficient nation, ruled by Prime Minister James Tremblay with an even hand, and remarkable for its museums and concert halls, ubiquitous missile silos, and national health service. The hard-nosed, hard-working, democratic, devout population of 4.588 billion Oceanian-Americans are either ruled by a sleek, efficient government or a conglomerate of multinational corporations; it's difficult to tell which.

The medium-sized, pro-business government prioritizes Defense, with Industry, Education, and Administration also on the agenda, while Spirituality receives no funds. It meets to discuss matters of state in the capital city of Ottawa. Citizens pay a flat income tax of 75.6%.

The frighteningly efficient Oceanian-American economy, worth a remarkable 1,119 trillion Oceanian-American Pounds a year, is broadly diversified and led by the Information Technology industry, with major contributions from Arms Manufacturing, Retail, and Tourism. Average income is an amazing 243,949 Oceanian-American Pounds, but there is a large disparity between incomes, with the richest 10% of citizens earning 1,102,718 per year while the poor average 33,173, a ratio of 33.2 to 1.

Children as young as eight can be found working in factories, pro-life activists often lecture pregnant women undergoing routine prenatal screening, the nation's reinforced coffee tables are constructed to survive an atomic blast, and rumor has it that Prime Minister James Tremblay has won three lotteries in a row. Crime, especially youth-related, is totally unknown. Oceania-America's national animal is the lion, which frolics freely in the nation's many lush forests, and its national religion is Church of Oceania-America.

Frances Francis the First of France,

Communist Beijing Must be China,