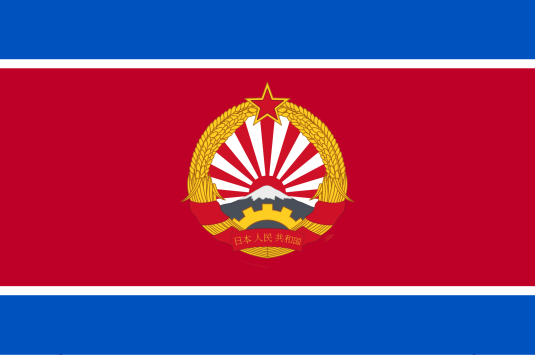 Strong, Prosperous and United Under The Sun

The Democratic People's Republic of North Japan is a gargantuan, orderly nation, renowned for its barren, inhospitable landscape, public floggings, and ubiquitous missile silos. The hard-nosed, cynical, humorless, devout population of 16.886 billion North Japanese are ruled without fear or favor by a psychotic dictator, who outlaws just about everything and refers to the populace as "my little playthings."

The large, corrupt, moralistic, socially-minded, well-organized government juggles the competing demands of Defense, Law & Order, and Education. It meets to discuss matters of state in the capital city of Hokutou-Ko. The average income tax rate is 75.5%, and even higher for the wealthy.

The powerhouse North Japanese economy, worth a remarkable 1,912 trillion Yen a year, is driven entirely by a combination of government and state-owned industry, with private enterprise illegal. However, for those in the know, there is a large, well-organized, broadly diversified black market in Arms Manufacturing, Information Technology, Automobile Manufacturing, and Retail. The private sector mostly consists of enterprising ten-year-olds selling lemonade on the sidewalk, but the government is looking at stamping this out. Average income is an impressive 113,235 Yen, and distributed extremely evenly, with little difference between the richest and poorest citizens.

The banshee wail foretells skies of death, reddish-brown is the new black, at the edge of the final frontier space's biggest missile platform is about to unfold, and thousands of picky mothers-in-law have been recruited to serve as even pickier cookery instructors. Crime, especially youth-related, is totally unknown, thanks to the all-pervasive police force and progressive social policies in education and welfare. North Japan's national animal is the Dragon, which teeters on the brink of extinction due to toxic air pollution, and its national religion is State-Shintoism.

North Japan is ranked 46,060th in the world and 2nd in KYCF for Most Efficient Economies, scoring 93.56 on the Krugman-Greenspan Business Outlook Index.

Most Recent Government Activity: 17 days ago