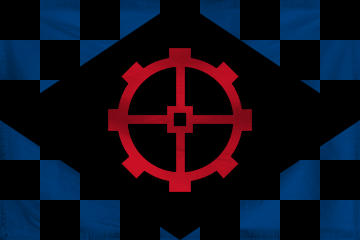 A processing point a day keeps the rogue A.I away The Main Processor
WA Member

The Allied Peacekeepers of Naralovian is a colossal, socially progressive nation, ruled by The Main Processor with an even hand, and remarkable for its compulsory military service, public floggings, and stringent health and safety legislation. The hard-nosed population of 5.061 billion Naralovianians have some civil rights, but not too many, enjoy the freedom to spend their money however they like, to a point, and take part in free and open elections, although not too often.

The large, corrupt government juggles the competing demands of Defense, Administration, and Education. It meets to discuss matters of state in the capital city of Central Prime. The average income tax rate is 88.4%, and even higher for the wealthy.

The frighteningly efficient Naralovianian economy, worth 737 trillion Processing Points a year, is fairly diversified and dominated by the Information Technology industry, with significant contributions from Arms Manufacturing, Tourism, and Book Publishing. State-owned companies are common. Average income is an impressive 145,764 Processing Points, and distributed extremely evenly, with little difference between the richest and poorest citizens.

Devotion to God is only skin-deep, you can't put down the nation's attitude to pet health, heartfelt sentiments are mercilessly marketed by a million-Processing Points treacle machine, and programmers often reinvent the wheel. Crime, especially youth-related, is totally unknown, thanks to a capable police force and progressive social policies in education and welfare. Naralovian's national animal is the Bloodhound, which frolics freely in the nation's many lush forests, and its national religion is The followers of the abyss.

Naralovian is ranked 135,030th in the world and 186th in The Free Nations Region for Largest Pizza Delivery Sector, scoring 662.56 on the Pepperoni Propulsion Productivity Index.

Most Recent Government Activity: 26 minutes ago