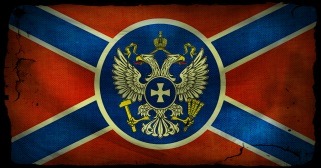 The Socialist Empire of Meedvheyt is a gargantuan, environmentally stunning nation, ruled by Our Autarch with an even hand, and notable for its public floggings, free-roaming dinosaurs, and irreverence towards religion. The compassionate, humorless population of 13.795 billion Meedvheytians are fiercely patriotic and enjoy great social equality; they tend to view other, more capitalist countries as somewhat immoral and corrupt.

The government — a sprawling, bureaucracy-choked, corrupt morass — juggles the competing demands of Defense, Education, and Law & Order. It meets to discuss matters of state in the capital city of Moskava. The income tax rate is 100%.

The frighteningly efficient Meedvheytian economy, worth a remarkable 3,008 trillion Vyets a year, is driven entirely by a combination of government and state-owned industry, with private enterprise illegal. The industrial sector, which is highly specialized, is dominated by the Information Technology industry, with significant contributions from Arms Manufacturing and Tourism. Average income is an amazing 218,080 Vyets, and distributed extremely evenly, with little difference between the richest and poorest citizens.

A degree of self-hatred is vital for a future in politics, parents seeking custody have to write a five-thousand word analysis of their child's imaginary friend, kindergartners' favourite dance move is the stop-drop-and-roll, and Meedvheyt isn't what it used to be. Crime, especially youth-related, is totally unknown, thanks to the all-pervasive police force and progressive social policies in education and welfare. Meedvheyt's national animal is the Bear, which frolics freely in the nation's many lush forests.

Meedvheyt is ranked 256,574th in the world and 6,771st in the Rejected Realms for Largest Insurance Industry, scoring -25.4 on the Risk Expulsion Effectiveness Rating.