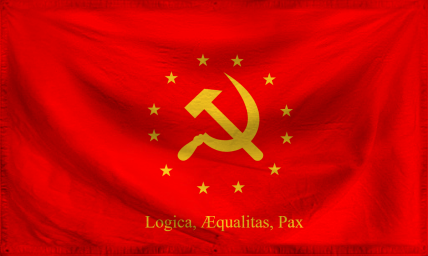 The Socialist State of Markadan is a massive, genial nation, ruled by the Markagrad Soviet with an even hand, and remarkable for its anti-smoking policies, ban on automobiles, and punitive income tax rates. The compassionate, democratic population of 1.641 billion Markadani are fiercely patriotic and enjoy great social equality; they tend to view other, more capitalist countries as somewhat immoral and corrupt.

The enormous, socially-minded government juggles the competing demands of Education, Administration, and Healthcare. It meets to discuss matters of state in the capital city of Markagrad. The average income tax rate is 91.1%, and even higher for the wealthy.

The strong Markadani economy, worth 134 trillion Florins a year, is driven entirely by a combination of government and state-owned industry, with private enterprise illegal. The industrial sector, which is highly specialized, is mostly made up of the Information Technology industry, with major contributions from Trout Farming. Average income is 82,139 Florins, and distributed extremely evenly, with practically no difference between the richest and poorest citizens.

Middle-aged metal fans quite enjoy being called "rebellious youths" by even older politicians, acupuncture is routinely prescribed for intravenous drug addicts, government ministers sport new billboards that read 'Will Trade Votes for Private Members' Bill Support', and court verdicts are predictable to within a hundredth of a percentage point. Crime, especially youth-related, is totally unknown, thanks to the all-pervasive police force and progressive social policies in education and welfare. Markadan's national animal is the termite, which frolics freely in the nation's many lush forests, and its national religion is State Atheism.

Most Recent Government Activity: 66 minutes ago