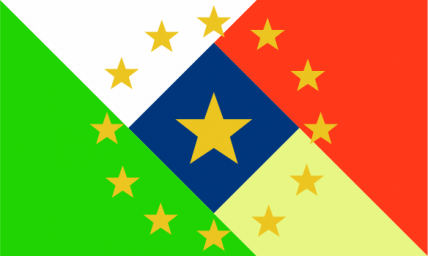 The United Kingdom of Lime82 is a gargantuan, environmentally stunning nation, notable for its absence of drug laws, punitive income tax rates, and stringent health and safety legislation. The democratic population of 11.166 billion Lime82ians hold their civil and political rights very dear, although the wealthy and those in business tend to be viewed with suspicion.

The government — a sprawling, bureaucracy-choked morass — prioritizes Healthcare, with Education, Welfare, and Environment also on the agenda. The average income tax rate is 72.1%, and even higher for the wealthy.

The large but inefficient Lime82ian economy, worth 322 trillion United Currencies a year, is highly specialized and mostly made up of the Tourism industry, with significant contributions from Pizza Delivery and Gambling. State-owned companies are reasonably common. Average income is 28,893 United Currencies, and distributed extremely evenly, with little difference between the richest and poorest citizens.

Same-sex marriages are increasingly common and voting is voluntary. Crime is totally unknown, thanks to a capable police force and progressive social policies in education and welfare. Lime82's national animal is the Amour Leapord, which frolics freely in the nation's many lush forests.

Lime82 is ranked 226,676th in the world and 915th in Europeia for Most Efficient Economies, scoring 35.33 on the Krugman-Greenspan Business Outlook Index.