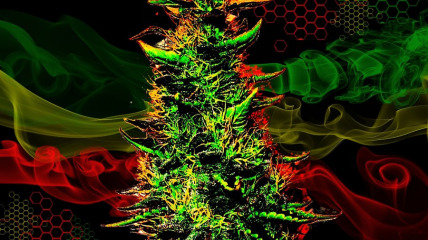 We take care of our own
WA Member

The United Socialist States of Larger Green Plants is a massive, cultured nation, ruled by Librum Sativa with an even hand, and remarkable for its national health service, smutty television, and irreverence towards religion. The compassionate, democratic population of 2.507 billion Small Green Planters are fiercely patriotic and enjoy great social equality; they tend to view other, more capitalist countries as somewhat immoral and corrupt.

The enormous, socially-minded government juggles the competing demands of Education, Administration, and Healthcare. It meets to discuss matters of state in the capital city of Greenfield. The average income tax rate is 88.2%, and even higher for the wealthy.

The very strong Small Green Plants Survivor economy, worth 231 trillion Small Green Leaves a year, is driven entirely by a combination of government and state-owned industry, with private enterprise illegal. The industrial sector, which is highly specialized, is dominated by the Information Technology industry, with significant contributions from Book Publishing, Basket Weaving, and Tourism. Average income is 92,250 Small Green Leaves, and distributed extremely evenly, with practically no difference between the richest and poorest citizens.

Children spend all morning taking out a comma and all afternoon putting it back in again, Super Barry Brothers is the most popular video game in the nation, space research funding has hit a recent high while several military bases are being closed down, and fake designer clothes are shredded and burnt while many in the world don't have a shirt on their back. Crime is totally unknown, thanks to a very well-funded police force and progressive social policies in education and welfare. Larger Green Plants's national animal is the Unseen Academical, which frolics freely in the nation's many lush forests.

Larger Green Plants is ranked 72,821st in the world and 581st in The Communist Bloc for Most Efficient Economies, scoring 78.37 on the Krugman-Greenspan Business Outlook Index.

The palace of God 2,

The Communist regime of Sovietchina,