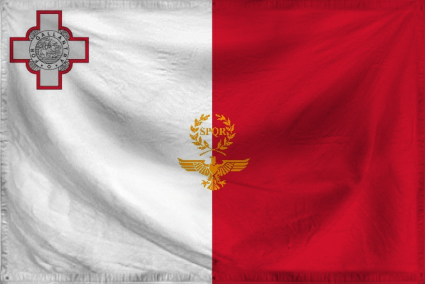 The Roman Protectorate of Isle of Melitae SPQR is a massive, safe nation, ruled by Caesar 'Octavian' Augustus with an even hand, and remarkable for its rum-swilling pirates, sprawling nuclear power plants, and pith helmet sales. The hard-nosed, hard-working, devout population of 2.021 billion Melitaens have some civil rights, but not too many, enjoy the freedom to spend their money however they like, to a point, and take part in free and open elections, although not too often.

The tiny government juggles the competing demands of Defense, Administration, and Education. It meets to discuss matters of state in the capital city of La Valletta. Citizens pay a flat income tax of 6.3%.

The all-consuming Melitaen economy, worth 270 trillion Denariis a year, is broadly diversified and led by the Tourism industry, with significant contributions from Retail, Arms Manufacturing, and Information Technology. Average income is an impressive 133,886 Denariis, with the richest citizens earning 6.1 times as much as the poorest.

The comic book series 'Caesar 'Octavian' Augustus and the Villainous Corporate Cronies' is a best-seller, the military is slashing spending on conventional arms and diverting it to spending on prosthetic arms, some people will do literally anything to be in the spotlight, and most ambassadors from Isle of Melitae SPQR retire only a few years after being appointed. Crime, especially youth-related, is totally unknown. Isle of Melitae SPQR's national animal is the Binu, which frolics freely in the nation's many lush forests, and its national religion is Jupiter.

Isle of Melitae SPQR is ranked 11,640th in the world and 241st in the Rejected Realms for Largest Publishing Industry, scoring 10,720.24 on the Bella Potter Productivity e-Index.