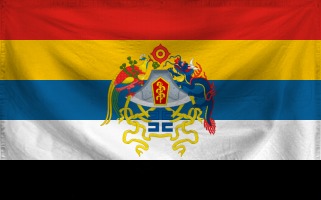 The Honor of Huang Dong Diplomat is a colossal, environmentally stunning nation, ruled by Peng You with an even hand, and remarkable for its museums and concert halls, smutty television, and devotion to social welfare. The compassionate, devout population of 6.292 billion Huang Dong Diplomatians have some civil rights, but not too many, enjoy the freedom to spend their money however they like, to a point, and take part in free and open elections, although not too often.

The enormous government juggles the competing demands of Healthcare, Education, and Law & Order. It meets to discuss matters of state in the capital city of Friend City. The average income tax rate is 79.0%, and even higher for the wealthy.

The all-consuming Huang Dong Diplomatian economy, worth 476 trillion Huangoes a year, is quite specialized and led by the Arms Manufacturing industry, with significant contributions from Information Technology, Uranium Mining, and Furniture Restoration. State-owned companies are reasonably common. Average income is 75,781 Huangoes, and distributed extremely evenly, with little difference between the richest and poorest citizens.

The army's use of chemical weapons leaves a bad taste in the mouth, Huang Dong Diplomatians are regularly fired for looking at MyFace during their lunch breaks, it can be a real jungle in a modern courtroom, and drill sergeants yell in the ears of bespectacled nerds in cybermilitary "reboot camps". Crime, especially youth-related, is totally unknown, thanks to a very well-funded police force and progressive social policies in education and welfare. Huang Dong Diplomat's national animal is the Panda, which frolics freely in the nation's many lush forests, and its national religion is Dragon.

Huang Dong Diplomat is ranked 46,232nd in the world and 3rd in The United Ascendancy for Largest Furniture Restoration Industry, scoring 3,936.03 on the Spitz-Pollish Productivity Index.