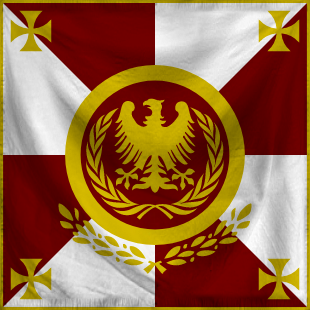 The Grand Duchy of Heinsbergen is a massive, safe nation, ruled by Grand Duke Heinrich VI with an even hand, and renowned for its ubiquitous missile silos, irreverence towards religion, and restrictive gun laws. The hard-nosed, hard-working population of 1.695 billion Heinsbergeners have some civil rights, but not too many, enjoy the freedom to spend their money however they like, to a point, and take part in free and open elections, although not too often.

The medium-sized government juggles the competing demands of Administration, Education, and Defense. It meets to discuss matters of state in the capital city of Pflegerdorf am Rhein. The average income tax rate is 29.7%, but much higher for the wealthy.

The frighteningly efficient Heinsbergenerian economy, worth 166 trillion Kupfermarks a year, is broadly diversified and led by the Book Publishing industry, with major contributions from Tourism, Information Technology, and Arms Manufacturing. Black market activity is notable. State-owned companies are reasonably common. Average income is 98,008 Kupfermarks, and evenly distributed, with the richest citizens earning only 2.2 times as much as the poorest.

Rude retail employees are now even ruder homeless panhandlers, defense lawyers suggestively note to juries how flagrantly happy victims were, parking's carefree without parking car fees, and a recent "genocide prevention" campaign includes murdering children based on their DNA. Crime, especially youth-related, is totally unknown, thanks to a capable police force and progressive social policies in education and welfare. Heinsbergen's national animal is the Alpine Swift, which frolics freely in the nation's many lush forests, and its national religion is Agnostic Atheism.

Heinsbergen is ranked 12,290th in the world and 215th in Europe for Largest Publishing Industry, scoring 10,115.89 on the Bella Potter Productivity e-Index.