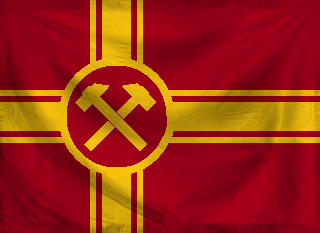 The Social Republic of Grebanistan is a massive, orderly nation, ruled by Vegio Stondaio with an iron fist, and remarkable for its closed borders, zero percent divorce rate, and irreverence towards religion. The hard-nosed, cynical, humorless population of 1.608 billion Grebanots are ruled without fear or favor by a psychotic dictator, who outlaws just about everything and refers to the populace as "my little playthings."

The medium-sized, corrupt, moralistic, socially-minded, well-organized government juggles the competing demands of Defense, Law & Order, and Education. It meets to discuss matters of state in the capital city of Grebanburg. The average income tax rate is 69.3%, and even higher for the wealthy.

The strong Grebanistanian economy, worth 192 trillion Grebancoins a year, is driven entirely by a combination of government and state-owned industry, with private enterprise illegal. However, for those in the know, there is a large, well-organized, fairly diversified black market in Arms Manufacturing, Trout Farming, and Beef-Based Agriculture. The private sector mostly consists of enterprising ten-year-olds selling lemonade on the sidewalk, but the government is looking at stamping this out. Average income is an impressive 119,479 Grebancoins, and distributed extremely evenly, with little difference between the richest and poorest citizens.

Parents are fined for sending their children to take out the trash after sunset, children who can't memorize their multiplication tables are sent to the mines, kids are arrested at gunpoint for playing with toy rifles, and the people consider response to rudeness to be an acceptable casus belli. Crime, especially youth-related, is totally unknown, thanks to a very well-funded police force and progressive social policies in education and welfare. Grebanistan's national animal is the Grebanist Boar, which is also the nation's favorite main course, and its national religion is Grebanistic Bhalidism.

Grebanistan is ranked 247,210th in the world and 1,441st in The Communist Bloc for Lowest Overall Tax Burden, scoring -62.51 on the Hayek Index.