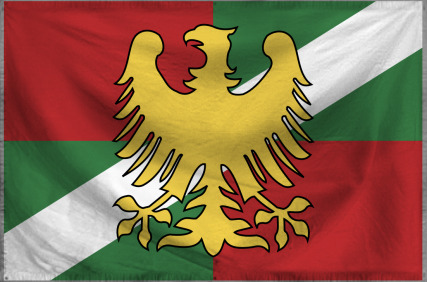 Only fools and apes tread on us. President Louis Cass
WA Member

The Incorporated States of Germanitaloslav is a massive, socially progressive nation, ruled by President Louis Cass with a fair hand, and renowned for its museums and concert halls, free-roaming dinosaurs, and otherworldly petting zoo. The compassionate, hard-working, democratic, devout population of 1.172 billion Germanitaloslavs hold their civil and political rights very dear, although the wealthy and those in business tend to be viewed with suspicion.

The relatively small, liberal government juggles the competing demands of Education, Healthcare, and Industry. It meets to discuss matters of state in the capital city of Cittávonsiła. Citizens pay a flat income tax of 14.2%.

The all-consuming Germanitaloslavian economy, worth 113 trillion Incorporated Lire a year, is broadly diversified and led by the Information Technology industry, with major contributions from Book Publishing, Woodchip Exports, and Uranium Mining. Average income is 97,219 Incorporated Lire, with the richest citizens earning 6.4 times as much as the poorest.

The nation's weary schoolchildren excel at sport but must count scores on their fingers, photos of picturesque coastal buildings are set against a backdrop of smokestacks and ship hulls, senior citizens can usually be found doing heavy manual labour, and builders across Germanitaloslav are blocked up with orders for new public loos. Crime is relatively low. Germanitaloslav's national animal is the Eagle, which teeters on the brink of extinction due to toxic air pollution, and its national religion is Nondenominational Christianity.

Germanitaloslav is ranked 5,678th in the world and 121st in 10000 Islands for Least Corrupt Governments, with 95.03 percentage of bribes refused.