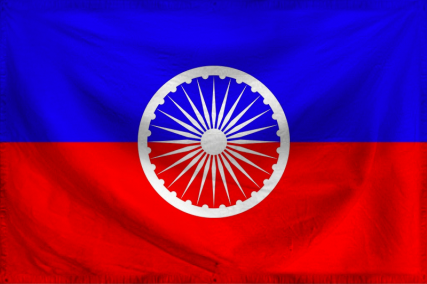 The People's Republic of Freedomindia is a colossal, efficient nation, ruled by We The People of India with a fair hand, and notable for its rampant corporate plagiarism, complete lack of prisons, and irreverence towards religion. The compassionate, democratic, cheerful population of 5.531 billion Freedomindians hold their civil and political rights very dear, although the wealthy and those in business tend to be viewed with suspicion.

The medium-sized, outspoken government juggles the competing demands of Education, Administration, and Environment. It meets to discuss matters of state in the capital city of Nalanda. The average income tax rate is 77.1%, and even higher for the wealthy.

The frighteningly efficient Freedomindian economy, worth 916 trillion Mohors a year, is driven entirely by a combination of government and state-owned industry, with private enterprise illegal. The industrial sector, which is highly specialized, is mostly made up of the Information Technology industry, with significant contributions from Tourism and Beef-Based Agriculture. Average income is an impressive 165,699 Mohors, and distributed extremely evenly, with little difference between the richest and poorest citizens.

Airplanes have giant grilles on their noses to knock drones out of their path, confessions don't count if suffixed with "izzle", We The People of India's used car is held together by bumper stickers that support the opposition, and the government is sending thousands of citizens overseas to defend a square mile of land. Crime, especially youth-related, is pervasive, perhaps because of the country's complete lack of prisons. Freedomindia's national animal is the Tiger, which frolics freely in the nation's many lush forests.