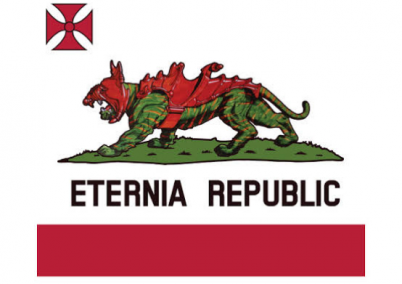 I Have The Power!

The Federal Republic of Eternia Octoginta is a massive, safe nation, ruled by He-Man with an even hand, and renowned for its compulsory military service, absence of drug laws, and stringent health and safety legislation. The compassionate, democratic, devout population of 2.564 billion Eternians enjoy extensive civil rights and enjoy a level of social equality free from the usual accompanying government corruption.

The medium-sized, liberal, socially-minded government juggles the competing demands of Spirituality, Defense, and Welfare. It meets to discuss matters of state in the capital city of Castle Grayskull. The average income tax rate is 37.0%, but much higher for the wealthy.

The sizeable but underdeveloped Octernian economy, worth 93.4 trillion krugerandors a year, is led by the Tourism industry, with significant contributions from Retail, Beef-Based Agriculture, and Trout Farming. State-owned companies are common. Average income is 36,417 krugerandors, and distributed extremely evenly, with little difference between the richest and poorest citizens.

The Federal Council of Eternia Octoginta has been announced as the new Head of State, graffiti graces every city's streets, Octernian scientists are mixing chewing tobacco with bacon flavouring in an attempt to craft the perfect male snack, and strategic economic sectors are controlled by the state. Crime, especially youth-related, is totally unknown. Eternia Octoginta's national animal is the battle cat, which frolics freely in the nation's many lush forests.

Eternia Octoginta is ranked 182,901st in the world and 6,769th in the South Pacific for Largest Timber Woodchipping Industry, scoring -1.41 on the Tasmanian Pulp Environmental Export Index.