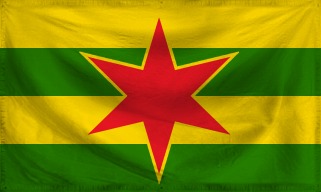 The Kingdom of Esgeirimmen is a colossal, cultured nation, ruled by Torgaf Müller with a fair hand, and remarkable for its museums and concert halls, sprawling nuclear power plants, and irreverence towards religion. The compassionate, democratic population of 7.584 billion Allers are free to do what they want with their own bodies, and vote for whomever they like in elections; if they go into business, however, they are regulated to within an inch of their lives.

The government — a sprawling, bureaucracy-choked morass — juggles the competing demands of Education, Environment, and Administration. It meets to discuss matters of state in the capital city of Windhelm. The average income tax rate is 96.9%.

The all-consuming Allisch economy, worth 895 trillion thalers a year, is driven entirely by a combination of government and state-owned industry, with private enterprise illegal. The industrial sector, which is highly specialized, is mostly made up of the Information Technology industry, with major contributions from Book Publishing. Average income is an impressive 118,046 thalers, and distributed extremely evenly, with practically no difference between the richest and poorest citizens.

Kindergartners' favourite dance move is the stop-drop-and-roll, the government loves seeing the little people fight, there has been a rapid increase of noise complaints over the sound of buzzing bees, and the nation's democracy attracts huddled masses yearning to breathe free. Crime, especially youth-related, is totally unknown, thanks to a well-funded police force and progressive social policies in education and welfare. Esgeirimmen's national animal is the dog, which frolics freely in the nation's many lush forests, and its national religion is Heathenism.

Esgeirimmen is ranked 92,577th in the world and 170th in The Internationale for Most Extreme, scoring 20.34 on the Paul-Nader Subjective Decentrality Index.

The Commune of Meddle,

Soviet States of Latin America, and