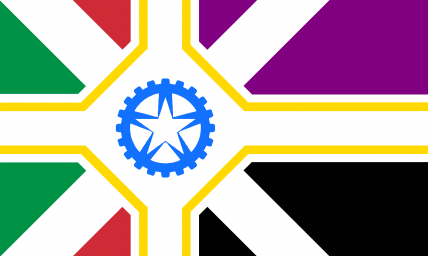 Being asexual didn't stop me from doing your mom
WA Member

The Democratic States of Error 404-No Nation Found is a huge, environmentally stunning nation, renowned for its keen interest in outer space, avant-garde cinema, and otherworldly petting zoo. The compassionate, democratic population of 534 million Ərrorishes love a good election, and the government gives them plenty of them. Universities tend to be full of students debating the merits of various civil and political rights, while businesses are tightly regulated and the wealthy viewed with suspicion.

The enormous government juggles the competing demands of Education, Administration, and Healthcare. It meets to discuss matters of state in the capital city of Faraway Town. The average income tax rate is 76.2%, and even higher for the wealthy.

The powerhouse Ərrorish economy, worth 46.1 trillion Tumblr followers a year, is driven entirely by a combination of government and state-owned industry, with private enterprise illegal. The industrial sector, which is quite specialized, is led by the Information Technology industry, with major contributions from Tourism and Book Publishing. Average income is 86,367 Tumblr followers, and distributed extremely evenly, with little difference between the richest and poorest citizens.

The government has adopted a "Lightning Never Strikes Twice" approach to dealing with natural disasters, foreign nations kill migratory animals at random in the hope that Error 404-No Nation Found will pay them to stop, immigrants who carry knives on them are presumed to be chefs, and funerals are often rudely interrupted by juggling clowns shouting for volunteers from the audience. Crime is totally unknown. Error 404-No Nation Found's national animal is the sussy amogus imposter, which frolics freely in the nation's many lush forests.

Error 404-No Nation Found is ranked 9,046th in the world and 39th in Gay for Largest Welfare Programs, scoring 5,127.32 on the Safety Net Mesh Density Rating.