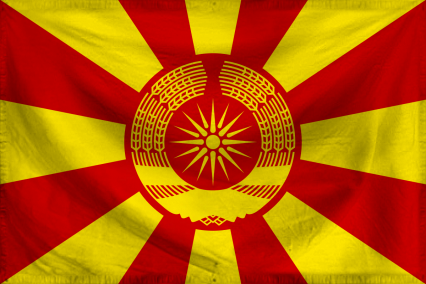 The Slavic Commune of Dimitrija is a massive, genial nation, ruled by Dimitar Gestakovski with an iron fist, and renowned for its museums and concert halls, compulsory military service, and devotion to social welfare. The compassionate, cynical population of 4.635 billion Yugoslavs are ruled with an iron fist by the dictatorship government, which ensures that no-one outside the party gets too rich. In their personal lives, however, citizens are relatively unoppressed; it remains to be seen whether this is because the government genuinely cares about its people, or if it hasn't gotten around to stamping out civil rights yet.

The large, corrupt, well-organized government juggles the competing demands of Industry, Education, and Defense. It meets to discuss matters of state in the capital city of Skopje. The average income tax rate is 79.9%, and even higher for the wealthy.

The frighteningly efficient Yugoslav economy, worth 789 trillion Denars a year, is driven entirely by a combination of government and state-owned industry, with private enterprise illegal. However, for those in the know, there is an enormous, deeply entrenched, fairly diversified black market in Information Technology, Arms Manufacturing, Tourism, and Retail. The private sector mostly consists of enterprising ten-year-olds selling lemonade on the sidewalk, but the government is looking at stamping this out. Average income is an impressive 170,314 Denars, and distributed extremely evenly, with little difference between the richest and poorest citizens.

Generals have trouble barking orders over the sound of thundering artillery, the entire entry for Dimitrija in the Hitchhiker's Guide to the World reads 'mostly harmless', pandemics are over and done with by the time it takes to pass the nation's stringent border security, and Dimitar Gestakovski is strangely popular with male politicians' wives. Crime is totally unknown, thanks to a capable police force and progressive social policies in education and welfare. Dimitrija's national animal is the Brown Bear, which frolics freely in the nation's many lush forests, and its national religion is Slavism.

Dimitrija is ranked 30,443rd in the world and 905th in The Communist Bloc for Most Income Equality, scoring 71.12 on the Marx-Engels Emancipation Scale.