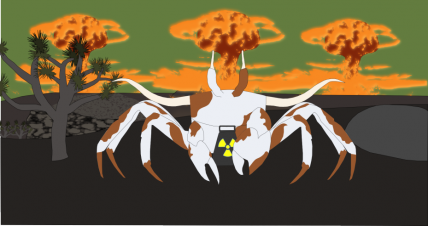 The Kingdom of Cattle Crab is a huge, socially progressive nation, remarkable for its absence of drug laws and spontaneously combusting cars. The hard-nosed, hard-working, democratic population of 672 million Cattle Crabians live in a state of perpetual fear, as a complete breakdown of social order has led to the rise of order through biker gangs.

The tiny, liberal, pro-business, outspoken government is primarily concerned with Defense, although Healthcare, Welfare, and Law & Order are also considered important, while International Aid and Spirituality aren't funded at all. Citizens pay a flat income tax of 8.0%.

The strong Cattle Crabian economy, worth 26.7 trillion kronor a year, is led by the Gambling industry, with significant contributions from Trout Farming, Soda Sales, and Automobile Manufacturing. Average income is 39,664 kronor, but there is an enormous disparity between incomes, with the richest 10% of citizens earning 244,340 per year while the poor average 2,802, a ratio of 87.2 to 1.

Surveillance cameras are banned, TV shows must meet strict ethnicity quotas, military spending recently hit a new high, and wigged-out hunters report playing croquet with the Queen of Hearts. Crime is a serious problem, with the police force struggling against a lack of funding and a high mortality rate. Cattle Crab's national animal is the horse.

Cattle Crab is ranked 194,597th in the world and 5th in CARD for Most Scientifically Advanced, scoring 47.43 on the Kurzweil Singularity Index.