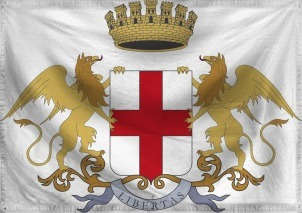 The Most Serene Republic of Carignanum is a colossal, socially progressive nation, notable for its museums and concert halls, triple-decker prams, and rampant corporate plagiarism. The compassionate, hard-working, democratic population of 5.017 billion Genoveses enjoy a sensible mix of personal and economic freedoms, while the political process is open and the people's right to vote held sacrosanct.

The medium-sized government juggles the competing demands of Education, Healthcare, and Administration. It meets to discuss matters of state in the capital city of Genova. The average income tax rate is 52.2%, and even higher for the wealthy.

The frighteningly efficient Genovese economy, worth 633 trillion Genovins a year, is broadly diversified and led by the Information Technology industry, with major contributions from Tourism, Book Publishing, and Retail. Average income is an impressive 126,238 Genovins, and evenly distributed, with the richest citizens earning only 2.0 times as much as the poorest.

Parents tell their children 'what a lovely mistake you turned out to be', parking's carefree without parking car fees, any secret that gets off someone's chest is promptly replaced, and the national anthem is considered broadly offensive to those who don't believe in Catholicism. Crime, especially youth-related, is totally unknown. Carignanum's national animal is the Lion, which is also the nation's favorite main course, and its national religion is Catholicism.

Carignanum is ranked 65,969th in the world and 414th in Europe for Highest Wealthy Incomes, with 174,251 Standard Monetary Units.