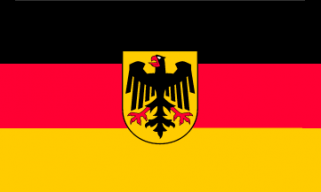 My duty is to lead the German people to glory. Marst Leef Terllbulin
WA Member

The Federal People's Republic of Bundes Republic Deutschland is a colossal, genial nation, ruled by Marst Leef Terllbulin with an even hand, and renowned for its frequent executions, irreverence towards religion, and stringent health and safety legislation. The compassionate, hard-working, democratic population of 5.52 billion Germans have some civil rights, but not too many, enjoy the freedom to spend their money however they like, to a point, and take part in free and open elections, although not too often.

The relatively small, corrupt government juggles the competing demands of Defense, Administration, and Industry. It meets to discuss matters of state in the capital city of Berlin Special Area. The average income tax rate is 24.0%, but much higher for the wealthy.

The frighteningly efficient German economy, worth 987 trillion Euros a year, is broadly diversified and led by the Arms Manufacturing industry, with major contributions from Information Technology, Tourism, and Book Publishing. Black market activity is notable. Average income is an impressive 178,966 Euros, and distributed extremely evenly, with little difference between the richest and poorest citizens.

Blackface performers claim they are being deliberately ironic, the government is spending billions of taxpayer Euros to support "struggling" industries, auditors are gutting every governmental department, and foreign workers are flooding in as Euros flood out. Crime, especially youth-related, is totally unknown. Bundes Republic Deutschland's national animal is the White Stork, which soars majestically through the nation's famously clear skies, and its national religion is People Capitalism and Anti Zionism.

Bundes Republic Deutschland is ranked 5,477th in the world and 129th in The East Pacific for Largest Publishing Industry, scoring 16,627.27 on the Bella Potter Productivity e-Index.